Rudolph Valentino’s most famous picture, The Sheik catapulted him to wide-reaching—if ephemeral—fame as an actor… leaving Arab perceptions as the collateral damage. 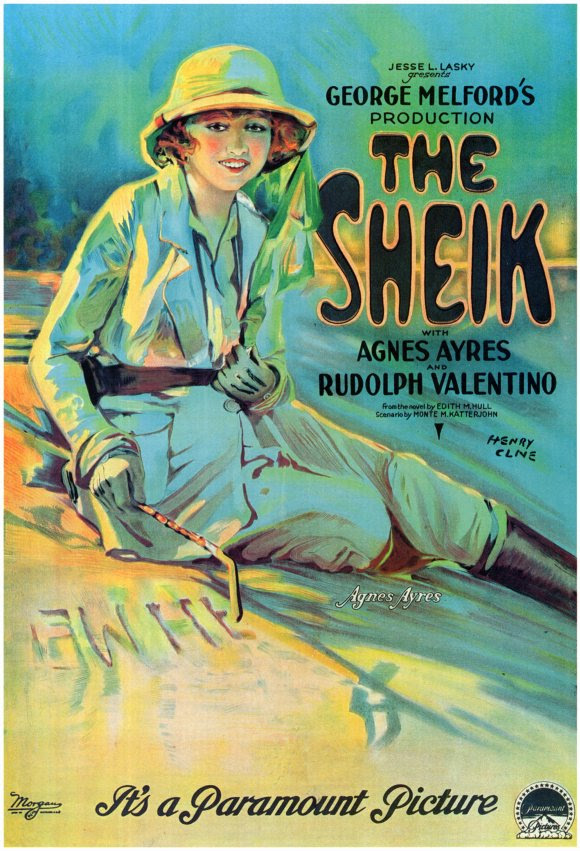 The Sheik tells a story of what we now call Stockholm syndrome: the Arab sheik of the title kidnaps a patrician, independent-minded European woman, keeping her in captivity until he can force her to fall in love with him. In keeping with contemporaneous gender politics, his scheme actually works… But soon the sheik soon finds himself protecting his proto-Patty Hearst from bandits who have the same regressive views of women as he has.

In order to truly understand this film, one must understand the nature of its male lead and deuteragonist, Valentino’s titular sheik. So I’ll begin this piece with a revelation made at the end of the film that technically qualifies as a spoiler. I’ll reveal it after the jump on the off-chance that you actually care about spoilers for a fairly boring silent romance from 1921.

Alternatively, just watch the film yourself.


When we first meet Valentino’s Sheik Ahmed Ben Hassan, we learn of his place as potentate of a nomadic desert tribe. The tribe turns to him to resolve disputes and decide which men get to own marry which women. Here we see part of a contemporary tendency in film to use “sheik” as a synonym for “thief” or “bandit.” Paramount marketed this film to women; as such we see a lot of Valentino’s chain-smoking, slightly-exotic presence.

As you may have guessed by simply looking at Valentino’s face, we learn in the last minutes of the film that the sheik himself does not actually have Arab ancestry by blood. The previous sheik adopted Ahmed when his parents died in an attack in the Algerian deserts outside Biskra, raising Ahmed as his own and having him educated in Paris. (This also explains why this “Arab” has a French manservant. Like miscegenation, you would never see a non-Aryan with an Aryan servant in a film from this time period.)

The main character, Lady Diana Mayo—played by Agnes Ayres—deduces this through the magic of overgeneralization…


Now, this made me feel aggrieved all by itself, mostly because it has no basis in fact whatsoever. I have big hands myself. Point of fact, I’ve met literally one person in my life with hands bigger than my own.i

This whole European-descent thing could have made an interesting plot twist—facilitated by the silent nature of the film—if it didn’t then point to the idea that Ahmed Ben Hassan chooses to live as an Arab out of a desire to act out his own latent misogyny.

Moreover, this plot twist removes any impetus for Aryan viewers to sympathize with a Semite. Indeed, the film actually exhorts us to root for an Aryan who fights Semites. This ultimately vitiates the power of the film to put us in the shoes of people very unlike us, arguably what film does at its very best.


To his credit, Valentino himself made it clear that he didn’t condone the portrayal of Arabs in the film. Said Valentino himself, “People are not savages because they have dark skins. The Arabian civilization is one of the oldest in the world... [T]he Arabs are dignified and keen brained.”1

Women in The Sheik


Even worse, if you judge by the rest of the film, you’d think the sheik told the truth. The sheik runs a lottery in Biskra, where Arab Muslims literally gamble with women using a roulette wheel… despite that the Qur’an expressly forbids gambling (Qur’an 2:219). The film explicitly likens Arab women to “chattel slaves” and the entire marital process as a game of chance with women as the stakes, the exact sort of mendacity that promotes racism and ultimately harms everyone.


Female lead Lady Diana Mayo starts the film as a fiercely independent gamine who resolves to trek out into the desert with no European escorts. Her peregrinations come to an abrupt end on the first day when the sheik quickly (and easily) kidnaps and rapes herii and she responds by gradually falling in love with him, subsuming her own free will into his desires.

Consequently, the film itself becomes an endorsement of Stockholm syndrome. Diana’s “character arc” (if you could even call it that) has her realizing she could find love by forswearing her independence and agency and capitulating before the “barbarous” Arab panjandrum… who then turns out to come from the same part of the world as her, so we have no risk of that “icky” miscegenation. (Even before the Hays Code, Hollywood considered Arabs non-white and avoided interracial relationships on film.)

Racism underlies the sexism in this film as well. In keeping with a longstanding “tradition” of mute Arab women in film, no female Arab utters a single intertitled word in the film. The Sheik also portrays white women as objects, objects of greater perceived “value” and “purity” than women of other races.

The film comes from a 1919 British romance novel by Edith Hull. Averred Hull of this entire situation, “I don’t wish to […] defend the callous brutality of Ahmed Ben Hassan […] But I am old fashioned enough to believe that a woman’s best love is given to the man […] she recognizes as her master.” Call me new-fashioned, but this sentiment sickens me. I don’t care—or even want to know—what people do in the privacy of their bedrooms, but there exists a clear dividing line between whatever craziness consenting adults get up to in their sex lives and portraying a love affair based around rape as a positive.


The racist elements in this film don’t stop with Arabs. Black characters fare little better. To the last, they all occupy servile roles, silently guarding a captive Diana or waving one of those feather-fans over a dignitary. The black-man-as-potential-rapist stereotype rears its ugly head as well.


One may rebut that the film depicts white servants as well, most prominently Ahmed Ben Hassan’s French valet Gaston, played by Lucien Littlefield. Even among the servants, though, the black servants get short shrift. Relative to the white characters, their jobs invariably lean to the more menial, less dignified side, and of course, they speak with other characters considerably less frequently.


Anyway, I don’t like this film, but I don’t consider it a total loss. The Sheik does have some decent visuals. I love these hand-painted intertitles that dot the narrative and mark scene transitions.


The film does have occasional bouts of good cinematography as well, with well-composed, intriguing shots of the desert.


Thankfully, we occasionally see brief moments of historical accuracy. Early on, we meet an Algerian dancing girl from whom Diana borrows some clothes.


As it turns out, Biskra actually did have girls who danced for money,iii as in this picture from a 1917 issue of National Geographic.


On a similar subject, the film really does have some pretty interesting costumes. Valentino’s real-life wife, Natacha Rambova, designed the costumes for this film. (I have no doubt she saw the National Geographic picture above before designing the dancing girl’s costume.) She did a very good job, and as one might imagine, her real-life husband got the best costumes of all!

Nevertheless, the more I think about this film, the more it seems the flaws outweigh the good points. Setting aside the racism and sexism, the general listlessness of the plot only twists the knife. Valentino and Ayres have strikingly little chemistry, subplots fizzle prematurely, and the action scenes languish under poor direction.


It astounds me that Paramount marketed this film toward women and then portrays their subjugation and the suppression of their free will positively. Of course, The Sheik came out during a different time. Frankly, I consider the film an unwelcome relic of the past that belongs there. Sadly, in today’s rising tide of Islamophobia, anti-Arab sentiment, and rape culture,iv I daresay a film like The Sheik would fit right in.

i If you really want to know, I have a palm size of 101 mm and a hand size of 216 mm. Since I started this blog to dispel stereotypes, I leave the rumored implications of large male hands to the reader.
ii The film implies it; the book depicts it.
iii One might say she… shook for the sheik?!
Sorry.
iv For an especially atrocious example, look at the recent Steubenville rape case and the subsequent unjust victim-blaming, sympathy for the rapists, and the disproportionate sentence of the whistle-blower, who will serve five times the prison sentence of the actual rapists!

1 Apparently, this quote comes from Dark Lover: The Life and Death of Rudy Valentino by Emily Leider… although I admit I’ve had no occasion to read it.
2 National Geographic Mar. 1917: 261.