I love pulp adventure stories. I love seeing two-fisted heroes go on perilous, exciting journeys to exotic locales amid the nascent technological and cultural revolution of the 20th century, with the Jet Age looming in the horizon. I love seeing heroes wade into an unknown land with naught but a dulling blade and the help of friends old and new… and maybe a potential new lover. I love bombastic, sneering, sibilant pulp villains who plan to use forbidden magicks or dangerous artillery to take over the world… but invariably seem unprepared for the actual logistics or prep work of world domination.

I haven’t seen The Mummy in years, but people I know swear up and down that it replicates that aesthetic. So I decided to watch it with that in mind and see what happens. Besides, if I wrote up The Mummy from 1933, logically it follows that I should tackle its most famous remake! 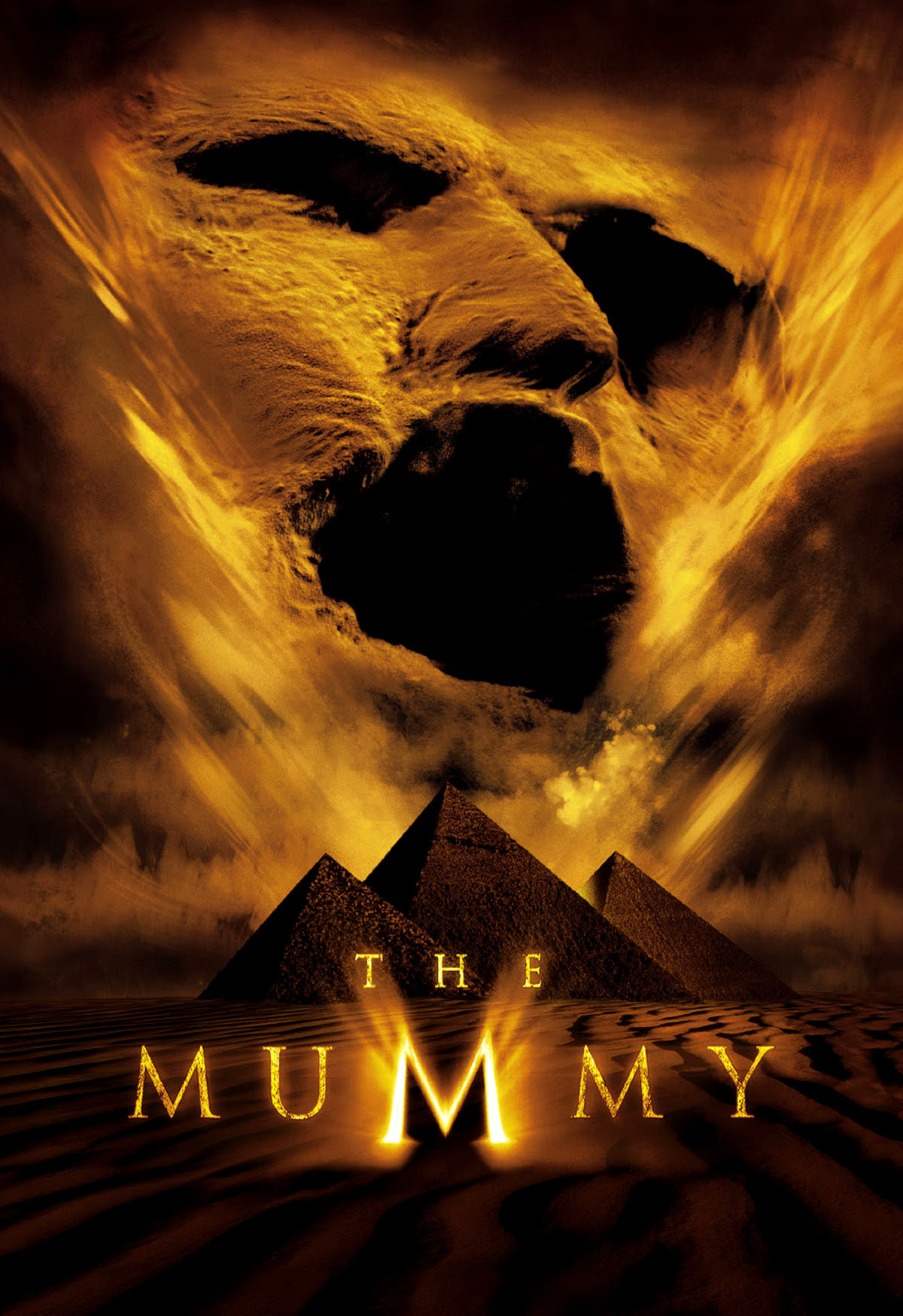 I have to confess that I really don‘t care for this poster. Just compare it to that Karloff/Johann-centered miracle of composition below! This just looks so inert by comparison! This one just has the sand-face from the first act, pyramids, and a poorly-mapped polygon serving as an ersatz eye-line. It only has one hue; it doesn’t have any contrast to speak of. Sure, I like the way the light bloom emanating from the large M forms the main lines of composition, but this entire poster still exists at a level of brand identification one step above store-brand food or Chinese bootleg toys.

Anyway, to sum up my opinion, I enjoyed the film… but I sure didn’t enjoy how it handled Arabs.

How it Handled Arabs


The Mummy clearly exists as an invocation of the pulp novels of yesteryear. As someone who owns a number of them, I can testify that those novels remain incredibly fun to read today. Unfortunately, they often contained provincial and backwards attitudes about race.i The Mummy clearly inherits a lot of the two-fisted fun of the pulps… but it has a lot of the bad stuff too. In fact, the film consistently portrays Arabs as filthy, toothless, fetid savages.

Where the original film expressed trepidation over the rectitude of the European presence in Egypt, this version puts its loyalties squarely therewith at the first opportunity.

One can see the root of these attitudes in the pulp novels that inspired this film.

Not long after, we become acquainted with Omid Djalili’s character, an acquisitive, concupiscent, bloodthirsty prison warden with inept, slow-witted henchmen. In keeping with a longstanding tradition of stereotypes of “dangerous” races, he has extremely little regard for human life, great difficulty with even basic math, and little control over his libido.

Djalili’s warden soon joins the protagonists as the token Arab. He ends up serving little purpose other than to give the characters an outlet for their irritation with the native Egyptians. At one point, a character complains about how camels smell and bite and spit, which the film pointedly juxtaposes with this Arab character.

Even in relatively quotidian scenes, Arabs repeatedly appear behind a thin layer of dirt and dust, making them look like anonymous, dirty savages. They bicker in loud, shrill Arabic ululations and seem almost uniformly obsessed with money or blood.

The contempt the film seems to have for Arabs manifests in the characters as well. The American/British characters show at least mild irritation any time an Arab even walks into the frame. Condescension suffuses their interactions with Arabs, and on the (numerous) occasions that an Arab character dies, his Aryan acquaintances scarcely bat an eye.

Later in the film, Imhotep, through little effort of his own, turns a horde of Arab extras into his mind-controlled slaves. These benighted Arab thralls, covered in boils and sores, look and act exactly like zombies. Nobody in the film questions the rectitude of killing them en masse until they can get to the antagonist. More to the point, Imhotep takes over the minds of every Arab he meets, but his mind control never works on the European characters. There seems to exist a subtle message in there about the perceived gullibility of Arabs.

At least the film paints Islam fairly positively. Oded Fehr and Erick Avari (both of whom we all know as “that one guy from that one movie”) play Ardath Bay (an entirely different character than in the original) and Terrence Bay, respectively. They lead the Medjai, a tribe of descendants of the ancient Egyptian temple guards.

The film depicts both as Muslims and portrays both as allies, although neither gets nearly the screen-time of their European compatriots. The film also handles their characterization fairly sloppily. For most of the film, Europeans—including the protagonists—and Medjai fought and killed each other left and right. Once they join forces, everyone seems to overlook this—another case of the relative disregard for life.

Compared to the Original

Nevertheless, Vosloo still does a decent job looking like a legitimately intimidating, formidable antagonist in his own right.

As in the original, Vosloo spends much of his screen time in the “human” form you see above. In fact, this film’s Imhotep uses more “traditional”-looking mummies as his minions, suggesting an escalated threat relative to the original film.

This version of The Mummy splits up Zita Johann’s dual role: Patricia Velásquez plays Ihmotep’s lost love Princess Ankh-sun-Amun in the past; Rachel Weisz plays Evelyn “Evey” Carnahan, the female lead, in the present. The use of two different actresses does make the film seem marginally more realistic, but it also attenuates the connection between past and present that made the story of the original work.

This split also has the added effect of cheapening both characters. Ankh-sun-Amun lacks the regal bearing of her 1932 counterpart, although Velásquez does give the character a bit of malevolence befitting her conspiratorial role.

Weisz, for her part, does a great job playing Carnahan as an opinionated, learned woman. She behaves like The Phantom’s Diana Palmer and The Shadow’s Margo Lane with shades of Marion Ravenwood.

Carnahan still feels a bit hollow without the dual-identity dilemma of her predecessor. More irritatingly, while Johann’s character ended up breaking free from her captivity and ultimately saving the day, Carnahan becomes just another damsel in distress, having the least agency of any of the protagonists.

Thankfully, this film has one large advantage over its predecessor: the protagonists never take themselves too seriously. Fraser, in his leading role as O’Connell, and Weisz as Carnahan have an infectious chemistry; the little jabs and snide shots they continually take at each other buoy the story. The film has a number of dedicated comic relief characters as well—thankfully not all Arab cultural stereotypes.

All of this plays to the greatest strength of pulp films. The better ones make up in humor and fun what they lack in spectacle. I firmly believe the Indiana Jones films succeeded because they have all of the above. The Mummy has a little from Column A and a little from Column B, and while this film can’t compare to, say, Raiders of the Lost Ark, (What can?) it still does well for itself.


I really like how this film depicted ancient Thebes. The film really sells a sense of scale, with the serried ancients flanked by monolithic likenesses of Anubis and vertiginous pyramids looming over them. (The CGI hasn’t aged terrifically, but, you know, 1999 and all.)

The film, as a whole, really does have a pulp feel to it. Oded Fehr narrates the prologue with the melodrama of pulp novels. Like, say, Dick Tracy, The Phantom, or The Shadow, the film implies more violence than it shows. Sommers switches to shadows and silhouette for the more sanguinary events.

Like Indiana Jones, O’Connell lives by his wits and survives situations nobody else would. Fraser plays the role with that Flynn/Fairbanks joie de vivre. He reminds me a lot of the Rocketeer, whom he resembles.

Pulp stories tend to deal with finding the extraordinary and exotic in places the readers know little about. The Mummy does this—as the first and third Indiana Jones films did before—by playing up the exotic beauty of the desert. Sometimes The Mummy’s compositions seem muddled with samey values, but every once in a while we get a nice, gorgeous shot like this one.

Speaking of Indiana Jones, this film cribs pretty heavily therefrom. The famous shooting in Raiders gets paid homage with the shooting of an immolated warrior on a cruise ship. The final shot of this film looks like a near-replica of that of The Last Crusade. The forced-perspective bridge of The Last Crusade and Raiders’ sunlit hidden path clearly inspire the scene in this film where the sun rises to reveal the lost city of Hamunaptra (and a subsequent scene with mirrors).

In keeping with the spirit of pulp, we get an aviation scene. Pulp adventure stories had this fascination with aviation, and I don’t mind a bit because the contemporaneous aircraft looked so cool!

Anyway, in keeping with that pulp spirit, we get a some real stretching of realism. When the plane crashes, we see characters emerge with nary a scratch, even two who rode on the wings.

All in all, I really liked The Mummy. I could’ve done without the stereotypes, but other than that, I found myself impressed with the characterization, the choreography, and the occasional flashes of greatness in the cinematography. The film over-relies on CGI and lacks the cinematographic vitality and heterogeneity in its desert photography of, say, Lawrence of Arabia, but The Mummy as a whole still does a good job weaving a good adventure in a great setting therefor. I wouldn’t call it a great film, but like its pulp film brethren, it still remains a fun way to kill two hours.

i For a particularly unpleasant example, take a look at this L.L. Balcom cover that glorifies the Ku Klux Klan.
ii Baumhofer remains better known for bringing Doc Savage to life. His Doc Savage covers alongside Lester Dent’s self-indulgent purple prose made Doc Savage’s books among the best-selling in the world at one point.