Although films about Somalia don’t normally fall within my purview with this blog, I found Asad sufficiently moving and the premise close enough to the Arab World to deserve mention. 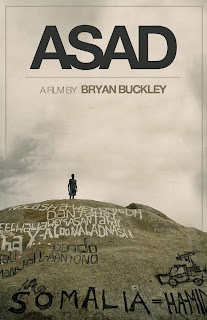 Asad takes a mere 18 minutes to tell a fascinating story about life in Somalia. Actual Somali refugees and asylum seekers comprise the entire cast (with the exception of one minor non-speaking role). Bryan Buckley directed the film, shot in Paternoster, an actual fishing village in South Africa’s West Cape.i

Asad’s story resembles a fable. The title character—a precocious young boy whose age belies his seafaring knowledge—finds himself in that age-old dilemma between the easy life of a pirate and the hard, honest life of a fisherman. His tenacity and independence make him ill-suited for the former, while his size and low self-esteem put him at a disadvantage in the latter. Either way, as the “man” of his penurious family, he already considers feeding his sisters and mother his responsibility, and he knows he has to live up to it. On top of that, he has a burning desire to succeed on his own merits.

Fascinatingly, the story feels like an adaptation of Hemingway’s The Old Man and the Sea, with the roles of the two characters reversed and the focus put on the boy.


Such a simple story works quite well because in each of these disparate paths, Asad has a role model. Laban, a boy a few years older than Asad, becomes part of the badaadinta badah (“saviors of the sea,” the pirates’ euphemistic appellation for themselves) for the money, not minding that he has to follow orders unquestioningly, however dangerous or unwise. Laban worships money and thus, he worships Jay-Z’s riches (which serves as another subtle point about the corrupting power of materialistic American images abroad). At the other end, Erasto, the village’s putative last honest fisherman, excels at fishing and gives generously of himself but lacks money or popularity.


Through these characters, we get a picture of life in Somalia outside the images of pirates and warlords that dominate our news media’s images thereof. Rather, the film shows us how those pirates and warlords destroy these regular people for personal gain. The “pirates” we see mostly consist of mere boys who follow orders without question. A gang of rapacious soldiers from Mogadishu (which, from this tiny fishing village, looks like “the big city”) nearly kill Asad and Ali—an already-injured friend roughly Asad’s age—for no real reason.


Through all of this, we see young Asad survive by his wits and determination. Ultimately, his intelligence and compassion become the axle around which the story turns, making the film all the more satisfying for it. Buckland’s eye for cinematography allows him to bring out the gritty beauty in the impoverished fishing village and the open ocean in all its vastness. In the former, one quickly gains a sense of community from Asad’s interactions with his acquaintances throughout the tiny village. The low-key yet exotic score brings the full gamut of Asad’s quietly-expressed emotions into view.


As a cat person, I loved the ending too. Watch the film on Amazon Instant and see what I mean.

i Frankly, that South Africa makes such a good shooting location for this short says plenty about the abject conditions there too.