Douglas Fairbanks’ swashbuckling Arabian Nights adventure won so many hearts and minds that the world needed a remake! The 1940 version actually hasn’t aged as well as Fairbanks’ original silent film, but I still liked it a lot. Unencumbered by the lack of sound, this version boasts wonderful music as well as some great moments and gorgeous use of color. Speaking of color, this film also marks the first major use of chroma keying in film history! 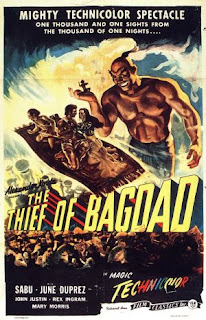 Race/Ethnicity in The Thief of Bagdad


As an Arabian Nights film, one can conclude that most of the actors play Arabs. As I’ve long since learned to abide as an Arab film buff, the cast boasts not one actual Arab in a credited role. As with the 1922 film, the princess character—played by fair-skinned American-British actress June Duprez—doesn’t look Arab in the slightest. The filmmakers seemed to think tapering her eyebrows would remedy that.

German actor Conrad Veidt plays the most “Arab-looking” character, the cynical, covetous black magician/antagonist Jaffar. Notice that the character has the Orientalist Fu Manchu mustache of his 1922 predecessor. Jaffar serves the same role, functioning as a quasi-Yellow Peril villain who arrogates a kingdom and secures his hold over the people through enslavement and executions. Considering this film came out during the onset of World War II, I also don’t find it at all coincidental that Veidt voices his villain with his distinctively sibilant German accent.

Furthermore, although he only appeared briefly, Roy Emerton played what I saw as the most stereotypical Arab in the film: a jailer who levies a death sentence on the two main characters. Notice Emerton’s scornful countenance, beard, and almost hook-like nose. He looks exactly like the kind of angry, menacing Arab one would see in an old cartoon.

This film has two protagonists: British actor John Justin’s king Ahmad and Indian-American actor Sabu’s street urchin thief Abu. Both do a fairly good job despite not looking the part. Sabu, in particular, brings a childlike élan and cleverness to the film that ultimately buoys it.

Whether the characters “look” Arab or not, of course, pales in importance compared to how they act. The rectitude of the protaogonists always seems a bit shaky. King Ahmad, in his naïveté at the beginning of his character arc, turns a blind eye to the draconian proscriptions and unjust executions that Jaffar imputes to him. Abu treats the Djinn as a slave without compunction. Most prominently, the most benevolent sultan in the film still literally sentences to death any commoner who even looks at his daughter. All of this speaks to the stereotypical idea of Arabs as people who have no regard for life.

Setting aside the Arab issue, I found the depiction of skin color in general a bit disturbing. The servility of each of the film’s characters seems inversely proportional to the color of his/her skin. Black actors consistently occupy servile, menial roles. Rex Ingram’s Djinn serves lighter-skinned Abu, who in turn serves the even lighter-skinned prince. The film even opens with German actor Conrad Veidt’s antagonist Jaffar surrounded by serried, mute, dark-skinned slaves engaged in menial tasks in the background. In a scene where Abu gets transformed from a dog back into a human, he keeps his leash on, which gives his reunion with Ahmad some uncomfortable overtones.


Plot-wise, the film bears almost no resemblance to its 1922 predecessor or Abdullah’s book. The title almost seems like a placeholder or a callback to the earlier film, since stylistically, thematically, and plot-wise, the two films share only a few ideas.

Unfortunately, the film as a whole suffers from extremely awkward pacing. The screenplay splits the novel’s protagonist Ahmed into two separate characters. There seems to exist constant confusion as to how to handle them; each spends a large amount of time absent from the film. A frame story consisting of Ahmad’s ruminations comprises over 40% of the film, with Abu’s almost freestanding adventure taking up most of the remaining film. The arcs of both characters resolve in a way that relies heavily on coincidence, ultimately to the detriment of the story.

Haughty, infamously-disorganized producer Alexander Korda went through six directors to make this film—including his brother Zoltan and himself. The inconsistent direction, exacerbated by a discursive screenplay, suffuses the entire film. We see radical tonal shifts at least three times and probably more. The running time weighs in at 106 minutes, but since the film feels like several mutually-divergent films awkwardly shoehorned together like centuries of layered ruins in a tell, those 106 minutes eventually feel surprisingly wearisome.

Despite a laudable effort by effects supervisor Lawrence W. Butler, age has made the film’s artificiality pop right out. The matte work still looks uniformly amazing, but the chroma-keying and the use of miniatures and puppets look patently, distractingly obvious in higher resolutions. But then, chroma-keying as a big-budget special effect really debuted here, and all technology has to start somewhere.

Ironically, the low-tech scenes look better now than the high-tech scenes. For instance, Jaffar casts a blinding spell on Ahmad using nothing more than shadows and ominous music.

The dialog has aged… interestingly. The florid, melodramatic circumlocutions of Sir Richard Francis Burton’s Arabian Nights translation feels replicated here, sometimes mawkishly. Still, we occasionally see some unexpectedly witty moments that make the entire film that much more endearing. For instance, we get this exchange in the scene where Jaffar meets the Sultan of Basra, and the latter shows the former his collection of increasingly chimerical toys, including a clock…1


Sultan: It tells the time. See how it works? Sheer magic, isn’t it?
Jaffar: I hope this dangerous device will never be allowed into the hands of the people.
Sultan: Dangerous?
Jaffar: Yes. If people once begin to know the time, they will no longer call you the King of Time. They will want to know how time is spent.
Sultan: Oh, you’re right. The people must never know.


Why I Still Really Liked It


In spite of this film’s flaws, it still has one big factor in its favor: heart. The Thief of Bagdad has an overabundance of heart. We get a multifarious and memorable, if sometimes oddly-paced, blend of adventure and romance. The lovable protagonists and Veidt’s scenery-chewing villain buttress the entire film. Roger Ebert famously compared this film to The Wizard of Oz, and I can absolutely see that. Even in its flaws and tonal shifts, the film remains fun to watch.

The film has some absolutely stunning photography. The Technicolor combines with the whimsical score to make the entire film feel borderline cartoonish. The matte work and production design weave together beautifully. The town scenes all look gorgeous and alive. Look at Baghdad in its exotic azure splendor.

Miklós Rózsa’s wonderful score comes closer than anything else to making this film feel consistent. Abu’s song “I Want to Be a Sailor” recurs as a leitmotif throughout the film, sometimes as a soaring melody propelling him to action, other times in foreboding mockery. This film’s operatic, varied soundtrack actually brought Rózsa to the attention of Hollywood, starting him on a long, fruitful career.

Like The Wizard of Oz, the film proves more than capable of getting creepy when it wants to as well. Abu’s quest to help his friend requires him to brave all sorts of increasingly strange and unsettling locales, like the very creepy statue of the Goddess of Light. A scene that I won’t forget anytime soon features one of Jaffar’s “toys,” a six-armed mannequin known as the “Silver Maid” (played by Mary Morris, who also played Jaffar’s beguiling minion Halima). The Silver Maid only appears this once, but her mechanical mannerisms and almost verglas-like skin leave quite the lasting impression.

As you might have guessed from the names, this film and its predecessor heavily inspired Disney’s Aladdin. The Disney film’s first act closely resembles that of the 1922 film, Abu and Jaffar had characters named after them, and most of the Disney film’s major characters have antecedents with similar personalities in this film. Disney’s adaptation would absolutely not exist without this film to crib from.

So thank The Thief of Bagdad the next time you get that “Prince Ali” song stuck in your head!

1 Although the sultan’s toy collection obviously consists of devices varying from anachronistic to impossible, the real-life progress on clocks by this point in history may surprise you. An 11th century Spanish Muslim engineer named Alī ibn-Khalaf al-Murādī (علي بن خلف المرادي) actually wrote a book (كتاب الأسرار في نتائج الأفكار) on contemporary technological developments that included information about mechanical clocks.
Posted by Jordan Saïd at 12:33 AM